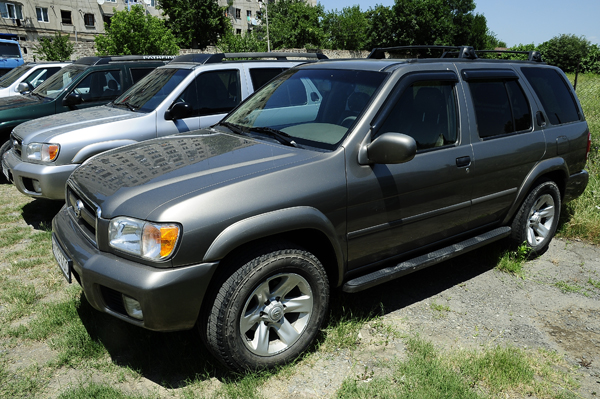 Arrival to Tbilisi Airport, Getting the jeeps at the airport, drive directly to Mtskheta, visiting Jvari, having breakfast at the restaurant, drive to Bakuriani, check in the hotel, Having some rest, after driving to Tskhratskaro Pass – Tabackuri Lake
We will visit beautiful places like tabackuri Lake and Tskhrastkaro Pass
Dinner and overnight in Bakuriani Hotel

After breakfast we drive to :
Borjomi – Borjomi Park – Bakuriani
Borjomi Park – Have the rest in Borjomi national park.
Tasting of the mineral water from the Borjomi springs nearby
Dinner and overnight in Bakuriani

Aftre breakfast we drive to :
Vadrzia – Zekari Pass – Tskaltubo
Vardzia Vardzia is a rock-hewn complex on the left bank of the river Mtkvari was founded in the 12th -13th c.c., during the reign of Giorgi III and Queen Tamar. Initially planned as a town-fortress, the complex became a well fortified monastery, which had a significant role in political, cultural, educational and spiritual life of the country. In the middle of the complex there is a Church of Assumption, richly decorated with mural painting. Afterwards drive to Tskaltubo.
Dinner and overnight in Tskaltubo

Aftre breakfast we drive to Mestia
On the way we drive to Sugdidi. Visit Dadiani Palace there. The representatives of Dadiani Dynasty were acquainted with world history, culture latest technical achievements. They were tightly involved in the social events. The Palace keeps 41 000 museum objects. Most of them are unique and invaluable examples of Georgian and foreign art. En route we visit Enguri Dam with the height of 271 meters (the highest dam of this type in the world). The Dam makes a water-storage reservoir in the picturesque gorges of Samegrelo and Svaneti mountains. It’s time to get ready for the most exciting part of the trip – a journey to Svaneti, the region of the highest mountains and glaciers and the most abiding ancient traditions.
Dinner and overnight in Mestia

Aftre breakfast we drive to Kutaisi
On the way visit Latali and Lenjeri single-nave basilicas of the 8th-9th-14th c.c., built by stones without ornamentation, with the interior richly decorated with murals. Afterwards drive to Kutaisi.
We can do Kutaisi City Tour. Kutaisi is the second largest city of Georgia in its west part founded about 40 centuries ago, former capital of the west Georgian Kingdom Colchis, to which is related the myth of Golden Fleece and Argonauts. Visiting Bagrati Temple (11th c. UNESCO heritage) and Gelati Monastery (12th c. UNESCO heritage). Visit smaller monastery of Motsameta, spectacularly sited on a cliff-edge. Afterwards drive to visit Sataplia caves (entrance fee is not yet stated, but approximately will be USD 1, 70-2, 30 . Sataplia State Reserve is a most multifarious and very rare monument. It is of complex character and contains geologic, paleontological, speleological and botanical monuments. The Sataplia Mountain is famous by its rarest and the most beautiful caves. This cave was firstly noticed by Kutaisi museum employee, pedagogues P. Chabukiani who was able to make organization of this valuable monument protection by the local government, and in 1933, there was found a dinosaur trace. Sataplia State Nature Reserve was created in 1935 to protect geological, paleontological, speleological and botanical monuments. The reserve is located in Tskaltubo region in 260 km. from Tbilisi, and in 9 km. from the resort Tskaltubo. Sataplia Nature Reserve represents the south-west edge of Racha gorge, total area of the Nature Reserve is 354 ha., 209 ha from here is covered by forest. Relief: Sataplia Nature reserve is mountainous, it’s great area is covered by most beautiful and multifarious wood strain Colchian type mixed forests. Mountainous Sataplia is located at 500 m. above sea level. Here we meet 5 carts caves which are famous for their beauty, size and from the scientists’ points of view were taken great consideration. One of these karst cavern length is 600 m., the beauty of this cavern is a cupola-shaped hall, located in 100 m. from the entrance, where the size and beauty of stalactites and stalagmites in the centre astonishes visitors. At the end of the cavern flows the spring which flows into the well, after that the water goes on in narrow impassable clefts and finds its way out in the south slope of the Sataplia Mountain as Oghaskura. There is an extinct volcano crater in the Nature Reserve. The highest top is at 520 m. Above sea level.
Dinner and overnight in Kutaisi hotel

Aftre breakfast we drive to :
Gori – Ananuri – Guauri – Kazbegi – Kazbegi Area
Ananuri is a Castle on the Aragvi River in Georgia, about 45 miles from Tbilisi. The fortifications enclose, amongst other buildings, two churches. In the older Church of the Virgin are buried some of the Eristavis (dukes) of Aragvi.The Church of the Assumption, built in 1689, has richly decorated facades, including a carved north entrance. It also contains the remains of a number of frescoes.
Drive to the ski resort Gudauri, afterwards drive to Kazbegi
Dinner and overnight in Kazbegi

Aftre breakfast we drive to :
Sighnaghi – one of the smallest towns with a population of 2,146. Sighnaghi’s economy is dominated by production of wine and traditional carpets. The town is also known for its landscapes and historical monuments and has recently turned into an important centre of Georgia’s tourist industry.
Visiting Bodbe – - On June 1, Orthodox Church of Georgia marks the day of St. Nino’s entrance from Cappadocia. Her tomb is still shown at the Bodbe Monastery in Kakheti region, eastern Georgia. St. Nino has become one of the most venerated saints of the Georgian Orthodox Church and her attribute, a Grapevine cross, is a symbol of Georgian Christianity.
Dinner and overnight in Sighnaghi

Tbilisi City Tour
In Tbilisi we will have a City Tour accompanied with guide and the transport.
We will visit Abanot Ubani – Sulphur bath house teritory, will visit Tbilisi synagogues and Narikala Castle, Mother Georgia monument and Ethnographic Tbilisi Museum.
Will have some sopping time at the Dinamo Market and Dry Bridge.
In the evening time we will have a gla dinner at the restaurant accompanied with Georgian Traditional Dancing Show.
Gala dinner and overnight Tbilisi