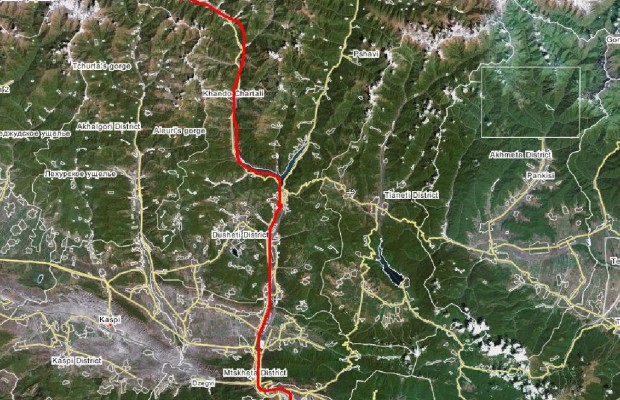 Arrival to Tbilisi, transfer and accommodation in the hotel
Overnight in Tbilisi

Gudauri is a ski resort located on the southern slopes of The Greater Caucasus Mountain Range in Georgia. The resort is situated in the Stepantsminda District, along the Georgian Military Highway, near the Cross Pass, at an elevation of 2,196 meters (7,200 ft.) above sea level.

Stepantsminda town is located along the banks of the Thergi River, 157 kilometers (98 mi) to the north of Tbilisi at an elevation of 1,740 meters (5,710 feet) above sea level. Stepantsminda’s climate is moderately humid with relatively dry, cold winters and long and cool summers.

Bus ride Ride2: Borjomi – Bakuriani, Distance 30km.
Bakuriani is a skiing resort in the Borjomi district of Georgia. It is located on the northern slope of the Trialeti Range, at an elevation of 1,700 meters (5,576 feet) above sea level.
The region around Bakuriani is covered by coniferous forests (mainly made up of spruce). The resort lies 30 km (19 mi) from Borjomi and is located within the so-called Bakuriani Depression/caldera.
Overnight in Bakuriani.

Bike Ride1: Visit canyon distance 30km. Have a Lunch.
Bus Ride2: Kutaisi – Sataplia.
Bike Ride2: ride in Sataplia Park 15km.
Bus Ride3: Sataplia – Kutaisi. Transfer to the hotel.
Okatse’s Canyon – natural monument in Georgia, located in the village of Gordi of Khoni municipality, in the vicinity of the river okatse. It is uniquely located in the unbelievably deep and narrow ravine.Okace’s canyon is 3 to 6 meters wide and 20 to 100 meters deep. Along the canyon several waterfalls could be found, height of one it is 70 meters.

According to the current administrative subdivision of Georgia, Mestia is located in the Samegrelo-Zemo Svaneti region, some 128 km northeast of the regional capital of Zugdidi. Mestia and the adjoining 132 villages form Mestia District. Its area is 3,044 km²; population – 14,248 .The population is mostly Svans, a cultural and linguistic subgroup of the Georgians.

Historically and ethnographically, Mestia has always been regarded a chief community of Zemo, or Upper Svaneti province. It was formerly known as Seti. Despite its small size, the town let was an important centre of Georgian culture for centuries and contains a number of medieval monuments – churches and forts – included in a list of UNESCO World Heritage Sites. In 1968, it was granted a status of a town let.

Ushguli or Ushkuli is a community of villages located at the head of the Enguri gorge in Upper Svaneti. The Ushguli villages contain buildings that are part of the UNESCO Heritage site. Typical Svanetian protective towers are found throughout the village. The Ushguli Chapel located on a hilltop near the village dates back to the 12th century.

The Mikhail Kalatozov documentary “Salt of Svanetia” was filmed in Ushguli.

Wake up, breakfast at the hotel.

Bus Ride1: Kutaisi – Tbilisi.
Tbilisi City tour. In the morning we will start with Tbilisi city tour, sightseeing tour and tasting festival full of colorful celebration.Tuor the main food market, flea market.We will see Metechi church of Holy Virgin – built in 5th century and rebuilt in 13th century. Royal palace was situated here before moving to Narikala Castle. Metekhi is a central-domed church. Visit monument of Mother Georgia and see the Sameba cathedral – Holy Trinity Cathedral, called as “Millennium Building”. Sameba is the greatest Orthodox Cathedral in Georgia and Caucasus. It represents the synthesis of cross–domed and central-domed churches. It is 100 meters in heigt.