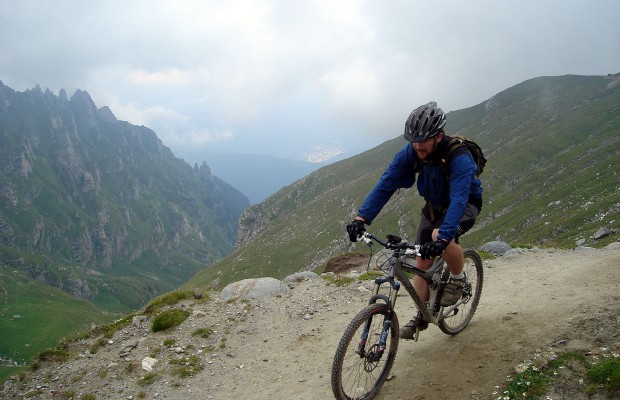 Arrival to Tbilisi, transfer and accommodation in the hotel, overnight in
Tbilisi.

Bus Ride1: Tbilisi – Borjomi. Distance 170 km.
Bike Ride1: Visit Borjomi national park: ride through various tracking/biking trails, after visit Borjomi town and taste natural spring water coming from the ground. Distance 55km.
Have lunch somewhere in park.
Bus ride Ride2: Borjomi – Bakuriani, Distance 30km.
Bakuriani is a skiing resort in the Borjomi district of Georgia. It is located on the northern slope of the Trialeti Range, at an elevation of 1,700 meters (5,576 feet) above sea level.
The region around Bakuriani is covered by coniferous forests (mainly made up of spruce). The resort lies 30 km (19 mi) from Borjomi and is located within the so-called Bakuriani Depression/caldera.

Bus Ride1: Bakuriani – Kutaisi , distance 140km.
Kutaisi is Georgia’s second large city and the capital of the western region of Imereti.
Bike Ride1: Visit canyon distance 30km.
Have a Lunch.
Bus Ride2: Kutaisi – Sataplia.
Bike Ride2: ride in Sataplia Park 15km.
Bus Ride3: Sataplia – Kutaisi.
Okatse’s Canyon – natural monument in Georgia, located in the village of Gordi of Khoni municipality, in the vicinity of the river okatse. It is uniquely located in the unbelievably deep and narrow ravine.Okace’s canyon is 3 to 6 meters wide and 20 to 100 meters deep. Along the canyon several waterfalls could be found, height of one it is 70 meters.
Overnight in Kutaisi.

Bus Ride1: Kutaisi – Mestia, distance 245km. Climbing altitude 1250m.
Bike Ride1: around mestia. Distance 15km.
According to the current administrative subdivision of Georgia, Mestia is located in the Samegrelo-Zemo Svaneti region, some 128 km northeast of the regional capital of Zugdidi. Mestia and the adjoining 132 villages form Mestia District. Its area is 3,044 km²; population – 14,248 .The population is mostly Svans, a cultural and linguistic subgroup of the Georgians.
Historically and ethnographically, Mestia has always been regarded a chief community of Zemo, or Upper Svaneti province. It was formerly known as Seti. Despite its small size, the town let was an important centre of Georgian culture for centuries and contains a number of medieval monuments – churches and forts – included in a list of UNESCO World Heritage Sites. In 1968, it was granted a status of a town let.
The town let is dominated by stone defensive towers of a type seen in Ushguli. A typical Svan fortified dwelling consisted of a tower, an adjacent house and some other household structures encircled by a defensive wall.
Unique icons and manuscripts are kept in Mestia Historical-Ethnographic Museum. Mestia is also a center of mountaineer tourism and alpinism.
Bike Ride2: ride around Mestia. 5km.
Overnight in Mestia

Wake up, breakfast at the hotel.

Mother Georgia and see the Sameba cathedral – Holy Trinity Cathedral, called as “Millennium Building”. Sameba is the greatest Orthodox Cathedral in Georgia and Caucasus. It represents the synthesis of cross–domed and central-domed churches. It is 100 meters in heigt.